First crack at some wake surfing video with the new Hero4. Quality on this thing is just amazing.

Quick clip of some trails near the campground at White Spar, just south of Prescott, AZ.

Three new channels showed up across appleTV’s today: History Channel, A&E and Lifetime.  I hopped right on and noticed Viking Season 2 was listed under the History Channel.  I was even more excited to find that for once, a content provider on AppleTV didn’t require a cable subscription / registration step – w00t! I’ve been internet only / cable tv less for about a year now, mostly surviving on Netflix and Amazon Prime.

I tried the Hulu route recently, but ughh…  the Ads were horrible, and they still expected you to pay!?!   Back to the Vikings…  I picked the first episode available (4) and hit play.  The first Ad showed up.  Ugh.  Luckily it was a quick 30seconds and the show was on.  Rad.

Looking at the timeline there appear to be 6 forced commercial breaks, including 1 at the beginning and 1 at the end.  All in all, not that annoying, even though all the Ads appeared to be for A&E (one of the other newly announced channels).

As a stock holder and someone who looks for potential trends, I cat help to think this could be a major movement for content provides to really take Apple’s TV platform as a viable option.  I haven’t encountered these commercial breaks in any other AppleTV apps before, so I can’t help but think this coincides w/ new updates to the appleTV SDK (which continues to remain hidden except for the few lucky content providers).  Back to the stock thing…  It’s pretty well known Apple sucks in a cool 30% of the proceeds generated by their platforms, would these Ad segments be any different?  Will anyone soon to able to leverage AppleTV for Ad placements, or do the content providers get to pick and choose?  AppleTV updates have long been on the rumor mill, WWDC is just around the corner after all… 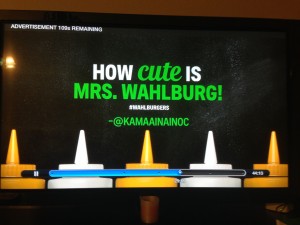 Most of the code written for Wallet Mon was wrapped up weeks ago, I just didn’t have a good direction for the UI.  When I came across Rob’s example of a sliding panel (via Corona Labs), I borrowed that and formed a super simple scrollView in the background for everything else.

As some in the blog post were asking what the code actually looks like, here’s a quick video sample: